Mosaic Life Care > About Us > Leadership

As a life care company, we are focused on those we serve. From those who enter our doors seeking world-class medical care to those who want to improve their health and life. We are invested in the vitality of the communities we serve and the health and quality of life of the individuals in those communities. We have servant’s hearts and put those we serve first. We are here to change health care for the better. We are here for a purpose, to treat the whole person, not just an illness or a condition, but to find out what makes you unique, what makes you get up in the morning. And how we can help you live a better life.

Dreams and aspirations live in us all. We all want something better out of life. By changing health care to life care, we can all have it. We can take those dreams and aspirations and develop a roadmap, a life plan, that will help you set milestones and goals. The best part, we will be right there with you, so you don’t have to do it alone.

Send a message to Dr. Laney

Michael Pulido was named Chief Operating Officer in 2017. In this role, Michael oversees the medical center, our Long-Term Acute Care Hospital, strategic health partnerships and general support operations, in addition to his prior duties as Chief Administrative Officer. Michael has more than 20 years’ experience in an integrated health-care system in human resources and administration. Michael is a certified Senior Professional in Human Resources (SPHR) and a Fellow in the Healthcare Advisory Board (FABC).

Michael attended the University of Houston on scholarship earning a Bachelor of Political Science as a student athlete on the baseball team. He received his Master of Healthcare Administration from the University of Minnesota. Michael and his wife, Sheri, have two children and reside in St. Joseph.

Karen has 30 years’ experience as a strong financial leader at health-care organizations in New Mexico, Kentucky and Missouri. Karen oversees Mosaic’s finances including providing strategic and financial support to operational leaders, developing a long-range corporate financial plan and other initiatives. Dr. Kammerer began his journey at Mosaic Life Care in 1998 in internal medicine and was named Chief Quality Officer in 2015 and became Chief Medical Officer in 2021. Dr. Kammerer earned a Bachelor of Science in Chemistry from the University of Wisconsin – Milwaukee, and he attended medical school at Creighton School of Medicine in Omaha, NE. He completed his residency at the Mayo Clinic in Rochester, MN and is Board Certified in Internal Medicine.

Dr. Kammerer has been a member of the Clinic Culture Committee since 2007, and was the Chair of the Department of Medicine from 2003-2006. 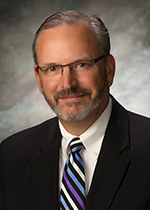 In January 2020, Dr. Turner was named President of Mosaic Life Care at St. Joseph, Medical Center. Dr. Turner will be responsible for medical center operations in addition to his role as the Chief Medical Officer. For more than 20 years, Dr. Turner was a practicing family medicine physician. He began his administrative journey, part-time, as the Clinic Physician Administrator in 2012. He transitioned to this role on a full-time basis in 2014. Mosaic has benefited greatly from his outstanding leadership. 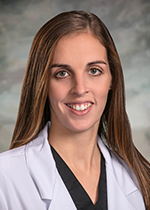 In her role as Chief Medical Information Officer, Crystal Macaluso, DO, provides data strategy and governance guidance, serves as executive sponsor of clinical systems and related data governance controls, processes and reporting, and leads and influences system‐wide data governance where clinical and non‐clinical systems overlap. Dr. Macaluso began her career with Mosaic Life Care in 2016 and continues to work as an Emergency Department (ED) physician. She previously served as the Assistant Medical Director for the ED for several years.

Dr. Macaluso is married to husband, Nick, and together they have five children. As a family, they enjoy sports, travel, and are active members in their church and community. 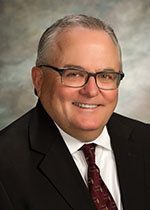 Pat Dillon was named Chief Government and Community Relations Officer in 2019. Prior to that, Pat was Vice President of Advocacy/Government Relations for Mosaic Life Care.

Pat has served on many non-profit boards in St. Joseph including Sertoma, United Way, Success by 6, Chamber of Commerce, the Missouri Western State University Foundation, Allied Arts, Downtown Partnership, Albrecht-Kemper Museum of Art and the YMCA. Throughout his career, Pat has received numerous awards and recognitions including the Ingram’s 50 People in Missouri You Should Know, Sertoman of the Year, Sam Walton Small Business Leader Award and many others.

Pat and his wife Nancy reside in St. Joseph and have two adult children, Patrick and Erin. Dana joined Mosaic Life Care in 2001. At Mosaic Life Care, Dana’s career began as a patient care associate. She then transitioned into a nursing role in the critical care units. In 2010, Dana became the Director of Nursing of the Long-Term Acute Care Hospital, a hospital-within-a-hospital inside of the medical center.

In 2014, Dana became the administrator of the LTACH and is responsible for providing administrative leadership to nearly 75 caregivers that provide care to chronically and acutely ill patients who require an extended hospital stay. Dana earned a Bachelor of Science degree in Nursing from Missouri Western State University in St. Joseph, MO. 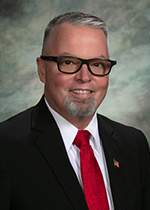 Tony Claycomb accepted the role as President for Mosaic Clinics in March 2020. Tony became the President of Mosaic Life Care at St. Joseph – Medical Center in 2022.

Tony recently served as Interim Associate Administrator for Operations of Mosaic Clinics. He has been with the organization more than 29 years. Tony has served as Vice President of Operations, Director of Surgery/Anesthesia/SPD/Surgery Center/GI Lab, Cardiac Cath Lab RN, Lead RN, and Certified Surgical Technologist. Tony also spent six years working in a private practice clinic as both a tech and a RN. Prior to his time with Mosaic, Tony proudly served on active duty for four years as a U.S. Navy Hospital Corpsman.

Tony received his Bachelor of Science in Nursing from Missouri Western State University and his Master of Business Administration from Benedictine College. 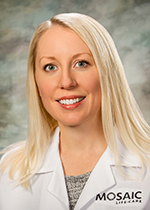 Dr. Dias was raised in the Albany area. She lives in Stanberry with her husband and two children. 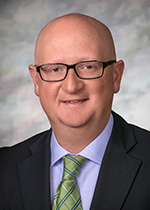 He and his wife Andrea have two children, a son Connor and daughter Chloe. Nate enjoys coaching his kids’ sports team and playing golf.

Jaren’s career in healthcare began more than 20 years ago and she has held positions in physician network administration, strategic business development and service line leadership. She earned her Bachelor’s degree at Missouri State and a Master’s in Health Administration from the University of Missouri. She is a Fellow of The Advisory Board Company, a member of the American College of Healthcare Executives, and an Alchemist of the Kaiser Institute Alembic Program. She also has served on numerous healthcare and community boards.

She previously served Mosaic Life Care as Associate Administrator of the Human Motion Institute, which enabled her to support caregivers who help patients return or progress toward their desired level of functioning and to “Live Life Well.” She also served the organization as Administrator of the Home Centric division, which is committed to delivering Life Care Anywhere Anytime until 2017.

In 2017, Jaren was named Administrator of Strategic Partnerships. In this position, Jaren works closely with our largest current and future strategic partners while forming other potential partnerships in the markets Mosaic Life Care serves. Jaren works with Operations teams to ensure strategic initiatives are implemented smoothly. In 2019, Jaren was named Chief Strategy and Business Development Officer. Jaren is responsible for the facilitation and coordination of our Strategy efforts including our Strategic and Long-Range planning processes along with overseeing regional and business growth opportunities.